IberoSlavica is  an international journal projected as a platform for encounters of Iberian-Slavonic researchers in Portugal and worldwide. Besides CompaRes this journal is promoted by the Research Group CLEPUL5 – “Iberian and Slavonic Literatures and Cultures”, which is part of the Centre for Lusophone and European Literatures and Cultures of the Faculty of Letters of the University of Lisbon, and CISCR-ICS – Commission for Iberian-Slavonic Comparative Research at the International Committee of Slavists.

In the beginnings of the 21st century, when the dialogue between Portuguese and Slavonic research communities and teams finally became a reality within Portuguese academia, it became possible to bring together the human recourses and conditions for advanced research in this field in Portugal, as a result of several joint activities of CompaRes, the Commission of Iberian-Slavonic Comparative Research at the International Committee of Slavists, the Institute for European Studies of the Chemnitz University of Technology, and CRCEES – Centre of Russian, Central and East European Studies of the University of Glasgow. The conferences, projects and publications associated with these institutions provided a considerable stimulus for, on the one hand, the construction of a new area of intercultural and literary studies, i.e., Portuguese-Slavonic or, at a wider level, Iberian-Slavonic literary studies, frequently including in its focus some non-Slavonic countries of the former Warsaw Pact, and, on the other hand, the unveiling of the necessity for the systematisation of the ideas of Portugal, Lusophone cultures and Spain in the Slavonic world which had become a part of the cultural heritage of Postmodern Europe.

The main activity of the abovementioned joint research teams focuses on establishing and developing the Iberian-Slavonic research field in a series of conferences entitled “Iberian and Slavonic Cultures in Contact and Comparison”, held at the Faculty of Letters of the University of Lisbon. These conferences also inspire wide debates which are meant to reflect upon the differing, complex roles of Iberians and Slavs in Europe. This has been accompanied by various cultural events intended to encourage the proximity between the two European cultures in question, which had been traditionally seen as distant and even antagonistic. This kind of research proves to be beneficial from a double point of view: not only does it find the new but also deepens old perspectives for both interdisciplinary research and cultural experience, always for the sake of Europe. CompaRes carries out a wide range of activities, focusing on cultural and scholarly dialogues between the Iberian and Slavonic worlds. Thus, in the course of various inspiring international events, two other institutions with a special focus on research were founded. Firstly, during the 14th International Congress of the International Committee of Slavists (Ohrid, Macedonia, 10-16/09/2008), the Commission for Iberian-Slavonic Comparative Research at the International Committee of Slavists (CISCR-ICS) was established. Secondly, the Research Group CLEPUL5 – “Iberian-Slavonic Interculturality” was founded. The Research Group in question has reached a considerable level of specialisation within the Centre for Lusophone and European Literatures and Cultures of the Faculty of Letters of the University of Lisbon (2009/2010), a university research centre financed and promoted by FCT, the Portuguese Foundation for Science and Technology.

IberoSlavica, the Yearbook, represents the three above-mentioned promoting institutions, and is dedicated to various aspects of the Iberian-Slavonic comparative research and activity. Each issue will contain:

• Presentations and/or reviews of published works on Iberian-Slavonic topics Bibliographic section listing the most recent studies from the Iberian-Slavonic research field and activities conducted around the globe.

All this considered, the editors hope to meet your expectations. IberoSlavica, the Yearbook of the three referred promoting institutions, welcomes contributions from all areas of Iberian-Slavonic comparative research. Any further enquiries and publishing materials should be sent to: compares.yearbook@gmail.com. Preparing your publishing proposals please follow the editing rules of IberoSlavica displayed in IS_StyleSheet, and apply the pattern of IS_template. 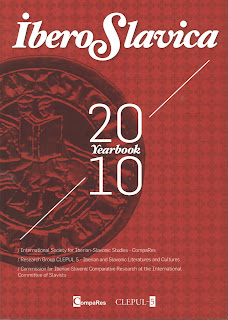