International Congress Ideas of Europe / Ideas for Europe
Chemnitz University of Technology
6-8 May, 2009


The European Union celebrated its 50th birthday. The Treaty of Rome may have made the project of a united Europe a reality in 1957, however, discussions of utopias regarding a community of European States have been conducted in several languages over the centuries.

The International Congress Ideas of Europe / Ideas for Europe – placed under the patronage of the President of the European Commission, Mr José Manuel Barroso – seeks to promote the debate on different ideas of a European Community. Knowing the different concepts of Europe that have been developed in the heterogeneous cultures of Europe enables to reflect on what Europe should be like in future. 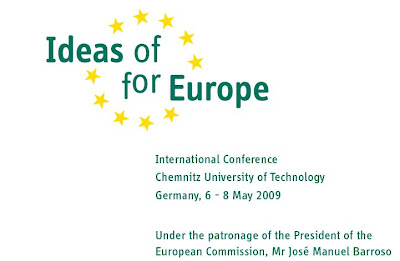